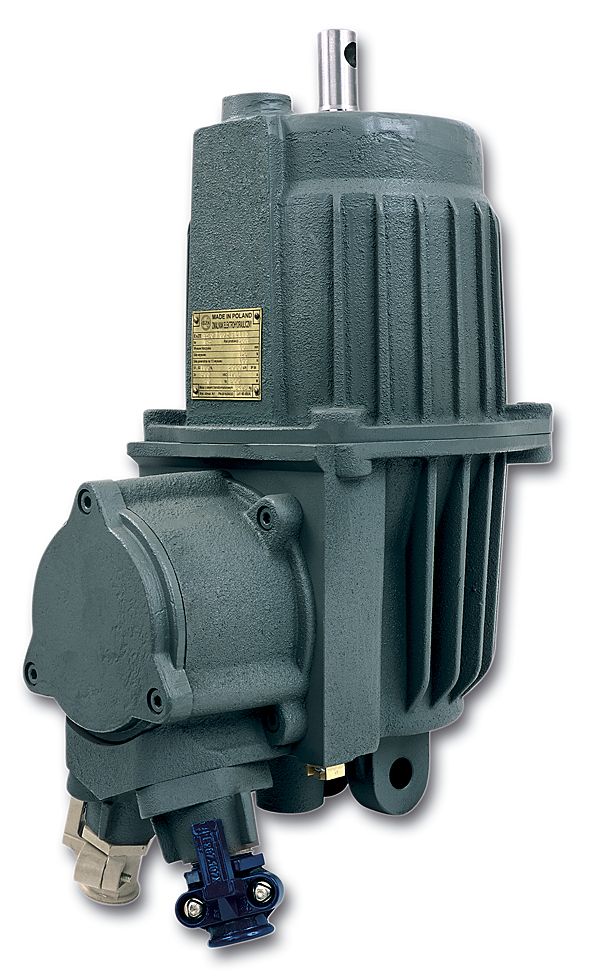 Electrohydraulic release ﬁnds application mainly in brakes for releasing (opening) shoe brakes. The release can be used for all applications requiring to-and-fro movement, e.g. to actuate gates and valves, to open and close ﬂaps and doors, to raise and lower barriers, to move levers and pull-rods as well as to execute operations of to-and-fro movement in various machines and equipment. Operation of the release consists in advance of the piston rod with appropriate force and to speciﬁc stroke. With built-in return spring, return of the piston rod also occurs with appropriate force.

Release type ExZEM provided with electromagnet having rectiﬁer circuit powered from outside with voltage of 42 V AC. Such design enables holding the piston rod in top position after switching oﬀ the hydraulic pump motor by external control and supply circuit. This reduces power drawn by the release.
Release ExZEM can be used both for continuous operation S1 as well as for periodically interrupted operation S3 with relative loading time up to 40% and number of actuations up to 600 c/h.

Electrohydraulic release is designed for operation in mining plants in which methane hazard or coal-dust explosion hazard occurs (equipment group I – category M2) as well as in places other than those mentioned above which are endangered with occurrence of explosive atmosphere (equipment group II – category 2 GD) Ex IM2/II 2 GD.
This release is an explosion-proof device with ﬂame-proof enclosure group I and IIB of temperature class 125°C (T4), with signaling circuits of spark-proof version: Exd[ia] I/IIB 125°C (T4).
As a device protected by its enclosure “tD”, the release can be used in the presence of inﬂammable dust in zone 21 and 22: Ex tD A21 IP65 T125°C.
Bimetal sensor or posistor sensor can be connected in the spark-proof circuit according to PN-EN 60079-11 of maximum voltage 30V.
A limit switch can be connected in the spark-proof circuit according to PN-EN 60079-11.