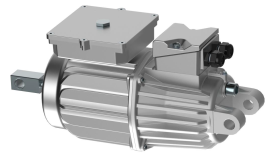 ZE-Lv and ZE-DIN-Lv releases are based on ZE and ZE DIN releases, but intended for horizontal operation.
Releases are driven by inductive three-phase cage motors, installed inside the release housing, which can be rated up to 500 V AC and 50 Hz. The  release  can  be used  both  for  continuous  operation  S1  as  well  as  for  periodically  interrupted operation S3 with relative loading time up to 100% and number of actuations up to 2000 c / h.

Normal (standard) N/1 – for utilization in open air in temperate climate. Protection rating IP 65 (PN-EN 60529:2003)
Lv releases are intended for operation in horizontal position and in positions the angle of 15° relative to horizontal.

Technical specifications of releases can be found in catalogue data of ZE and ZE-DIN releases.